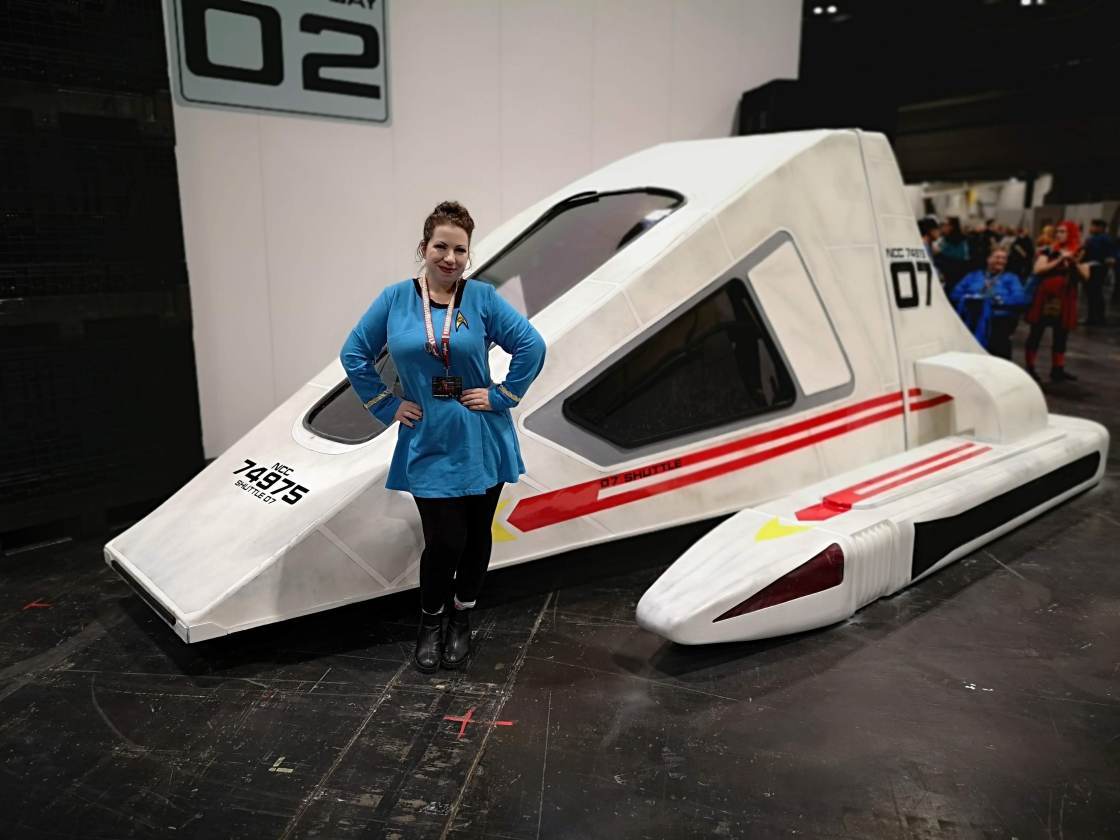 To Boldly Go… To Destination Star-Trek and battle EDS

It’s late October, finally it’s here, Destination Star-Trek, the biggest convention on all things Star-Trek in the whole of the UK! But my war isn’t with Klingons its with my EDS.

I was nervous, I admit it. This was the first convention I’d ever been to, so I had no idea what to expect. But it was more than that, I was nervous because of my health. I was worried that I would get overly exhausted to the point that I couldn’t attend, and I’d spent money on this ticket and hotel, I couldn’t afford to miss it.

But when you suffer from chronic illness these things have to be factored in. If my POTS got bad, would my friends be around to form a human shield around me while I laid down? Would the pain be so intense I wouldn’t enjoy myself and how could I prevent this? There were lots of things to consider and in the end, I was hoping that my plan of being in my wheelchair, having my boyfriend as my constant carer there and friends on hand for extra protection was the best I could do, that and really rest up the week beforehand.

So with plan made, wheelchair and costumes stowed in the car, we set off to pick up my best mate Alex and drive on to Birmingham. I spent most of the car trip bundled up to keep me warm and dozing in the backseat as my Boyfriend took care of getting us there. It took nearly five hours instead of three because of torrential rain and crashes on the motorway. But finally we got to the wonderful Arden hotel and unloaded.

I had enough energy to have a wonderful Indian meal that evening as I knew it was a nice late start the next day. And I wanted to treat my boyfriend who is a die hard Star Wars fan and doesn’t really know or understand Star Trek. Yet he was stepping up to endure it all for a whole weekend for me, as my health is so bad of late I need constant supervision. What with my fainting, struggling to go to the toilet alone, eating issues, memory failure, exhaustion, not to mention the dislocations I suffer daily, you can see why a carer is a must have accessory of the year for me. So he got to eat a lovely meal before he started ‘work’ the next day. And to be fair it really is a full time job for him, especially when he isn’t even a Trekkie.

Friday was here, it was the first day of the convention and I was so excited. My boyfriend took me to the hotel jacuzzi and steam room first to try and loosen my body a bit, then I donned my star trek original Series uniform and attempted to make myself sixties looking. Then It was in the wheelchair and we were off. On the journey, I felt a little concern about my chair since I had never been to the NEC in it before. I was worried about access but more about it being too crowded and people tripping over me. The unknown was scary.

I needn’t have worried. Access was fine and as soon as we got there, those who needed ‘extra help’ got put into a seperate line at registration and we were the first queue to go in. At this point I would like to say how nice the whole event was as a disabled person. I liked how we weren’t labeled with disabled, we were just classed as those who had asked for extra help. We had pink wristbands that most of the volunteer staff were always looking out for. A few times they pulled me out of a queue so I could get in first. They had good disabled areas at the edge of the seat rows in the talk areas too. I felt I was always treated with kindness and respect. Though I have one comment. Carers have to sit with who they are caring for. So though spaces were made for wheelchairs, there weren’t any seats free for the carers. Volunteers would have to ask abled bodied people to move which was tiring. On the last day they stuck signs to the seats saying ‘Carers’ which helped a lot. I hope in the future they always reserve spaces for both disabled and carers to save stress.

But onto the convention itself. We rolled in and I was instantly overwhelmed. I’d seen pictures and videos of conventions online and I knew people dressed up but it didn’t prepare me for the amazing costumes that I saw. The convention hall itself had amazing set-pieces and a museum, a gallery, gaming areas, stalls, actors already signing things. The whole thing was very overwhelming to me and I didn’t know what to do. I just went in circles at first, not quite taking it in and it just took me an hour to adjust but after that I was fully in the swing of it.

That first day I got to see a real life astronaut because the European Space agency were giving amazing talks for the whole weekend that I always tried to catch. And that’s the great thing about a Star Trek convention, it’s not just about the fiction, it’s also about the facts that the fiction is based on. Star-trek has always been an ode of love to science. So it was amazing to have some science lectures. Maybe next time they could do a mini planetarium.

After that my friends and I got some great photos together being silly. But then I was lucky enough to get a photo with George Takai. I managed to get out of my chair for it because I just wanted a nice photo for my mum where I wasn’t in the wheelchair. (Do check out the video I made below if you want to see more photos of the convention then the ones I put in this blog.) George is such a nice guy and held my hand to help me up to him.  It was an honour to meet him as my parents have been fans of Star Trek since the original series and brought me up watching it, so having a photo with an original member was a very big thing for me and I was very proud of having a photo with George and tribbles on the original bridge.

Later that day Tracee Cocco came running up to me, my friend Emma and asked my boyfriend to take some silly pics for her, so we spent fifteen minutes or so just having a laugh with her and that really thrilled us. But no matter how much fun I’m having, I can’t ignore my illness and during the queue for the opening ceremony I succumbed to exhaustion and fell asleep in my wheelchair. My boyfriend and friends, knowing I needed to rest, left me to sleep and only awoke me when it had begun.

After the opening ceremony we went back to the hotel and despite being absolutely shattered we went to the Star Trek party that was at the Hilton. We got there and met friends at the bar then went to the actual party. It was like a school disco unfortunately, not an ounce of sci-fi cool and not my scene at all so we went back to the bar. I didn’t last long though and soon enough we headed home and flopped into bed.

The second day was very crowded but since my whole day was mainly going to be in the theatre listening to talks, it didn’t bother me too much. I got to see Sir Patrick Stewart talk about the new Picard series and it was a delight. My boyfriend began to really enjoy himself despite not being into Star Trek as he loves Partrick Stewart as an actor, he also found the moving stories of George Takai’s childhood touching and he laughed throughout Brent Spiners Talk. I think this proves that this convention was great even for non Trekkies.

I did again fall asleep at one point while waiting for a talk to start but again my boyfriend woke me up at the right time. At the end of this day there was another party/casino thing happening at The Hilton but I just couldn’t face it. I was so exhausted I just couldn’t make it that night and so we had a nice meal at our hotel instead and then went to sleep

Sunday, the last day, wasn’t as crowded as the previous day and I appreciated that. I spent the day getting autographs, merchandise, enjoying that exhibits and listening to some talks. I fell asleep once but in the most I did really well. I had made new friends, I’d had an amazing time and I wanted to do it again. unfortunately I couldn’t afford too as it’s a lot of money for a ticket, hotel, food and other bits. So imagine my joy when at the end of the day they announced that Destination Star-trek 2020 would be in London. It was like a fairy godmother granted my wish. I could go to the ball and better yet eat and rest at home, plus I would have an even bigger support system as most of my friends would attend. It was the perfect ending to an amazing weekend.

Now I’m back home and desperately trying to recover from such a wonderful weekend but for somebody with my illness it is so exhausting it’s like doing back-to-back marathons and I’m suffering from it. Since then I have had nose bleeds which is my body rupturing, I’ve had a lot of dislocations, internal organ issues and just general exhaustion but I regret NOTHING!!!! And I will do it again next year. You have to live your life to the fullest when you can.

So if you are a Star Trek fan, I recommend that you go to the next Destination Star Trek. And if you do go, come over and say Hi to me if you see me.